Petticoats in a dream pertain to marital or romantic affairs, and their meaning depends on the action and other aspects of the dream which must be correlated, but as a general guide: petticoats which the dreamer considered as pleasing or pretty (rather than strictly utilitarian) are a warning against vanity and conceit; buying petticoats is a caution against extravagance; changing a petticoat predicts that the dreamer will soon be off with the old, on with the new; losing a petticoat is a sign of unexpected rivalry for the affection of someone the dreamer takes for granted; a torn petticoat indicates disenchantment; a mended petticoat (or to mend one) is a warning against foolish pride; it is frequently better in the long run to sit on your pride than to stand on your dignity.

There was a wedding in the neighbourhood with drinking and dancing well into the night and through to the early hours of the morning.
Now Mary was able to drink as well as she could dance, and as she spun around in a drunken dance the buttons of her skirt caught onto
a nail. The buttons burst open and her skirt fell to the ground, to the great delight of the others in the room who laughed and jeered her. This is the incident that earned her the name of 'Petticoat Loose.'

I am so pleased with my little butter-yellow machine that has more grunt and cleaning ability than any vacuum I have ever owned. It picks up the beagle's hair from carpets, beds and car - in fact if the beagle was not quite as round as she is it would pick her up. It certainly is not safe to wave the nozzle around the curtains and I had a nasty petticoat incident whilst my husband was testing the machine and I was bending over.

"An article entitled 'Petticoat Girls in School Parade' appeared in the British Daily Mirror (1961).  Here are some relevant excerpts:

The headmistress said the girls were deliberately showing their petticoats at school, and decided it must stop...

"The girls aged seventeen and eighteen lifted their gymslips and showed the headmistress what sort of petticoat they were wearing...

Girls caught wearing a frothy, frilly, non regulation petticoat were told not to wear it again at school...

They must be taught to realise that the sight of a petticoat to a young boy can be very provocative... 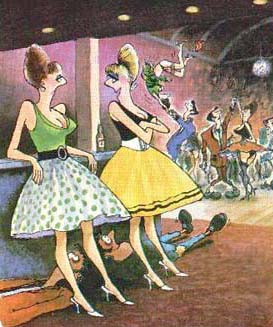 "I think we're in luck tonight, Gloria. I can feel somebody looking at us."

Era newspaper bits (Each can be varying enlarged)

"A cute surprise in this past Thursday's (March 17, 2011) Queens Chronicle, a give-away paper. A pretty and talented local young lady performed at Carnegie Hall and chose a very Pond-appropriate outfit to wear."

"Here are printouts (#1  #2) taken from 'Friends Reunited,' three paragraphs of which refer to our favourite topic.
This reflects what happened at some girl’s schools in the UK during the early ‘60’s."

of certain interest to all of us!

The Full Skirt Becomes Fuller . . . and Fuller Yet: Those Crucial Crinolines