~~~~This gal is a treasure. We are so distressed over her forced~~~~ retirement. It was a sad time for all Poufbunnies and a sad concert. She almost always wore pettis and crinies on stage. Here are some of ~~~~her thoughts. We miss you, brave dear~~~~

When I was deciding what to wear to the concert, I knew only my red vinyl party dress with crinolines would do. So we called the Country Music Hall of Fame, where we had donated it in 1987, and borrowed it back. I was determined that this occasion not be funereal. Even though hepititis was forcing me to retire, I wanted the night to be full of joy. I said to Wynonna, "Honey, this isn't my going-away party. This is your coming-out party."

If Scarlett o'Hara took the green curtains off the window and wore them, then this is like I took the red vinyl seat covers off my '57 Chevy. The dress was my armor for the night because inside that suit, which could stand up by itself if you took it off the hook and set it on the floor, I was incredibly fragile.

Wynonna and I suspected that people were expecting a tearful swan song, so I strutted the stage and inquired, "Did you guys really think somebody who'd wear a party dress like this would just retire to the farm without throwing a blowout bash?"

After the concert we boarded our bus and began the journey home. I saw the Krystal restaurant, where I used to go at midnight after my shift as a nurse at the Rutherford County Hospital years before. My daughter Ashley screamed, "Stop the bus!" Wynonna, Ashley and I marched into Krystal's. Since we eschew fast food, we were unsure of what to order. Ashley blurted out,. "We'll just take one of everything!" Then we headed home.

IN THAT SAME ISSUE OF PEOPLE, Jane Seymour says, "I have a very small waist and a long back, so crinolines look lovely on me." So why doesn't she wear more of them? 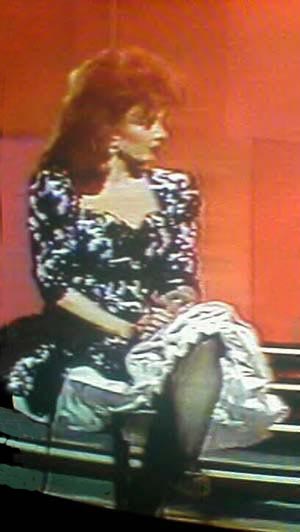